I miss blogging in the evening but life is busy these days. Not to mention that the choice between spending quality time with the babe or on the computer is not a difficult decision.
Last night Nathanael was wide awake for quite some time. He is trying really hard to roll from his belly to his back. He teeters on his side then fall back onto his belly. It'll be nice when he accomplishes that task because he loves to sleep on his stomach (but I won't let him). I snapped a few photos of him just gazing around the room. I have always wondered what little babies are thinking, as they look around. 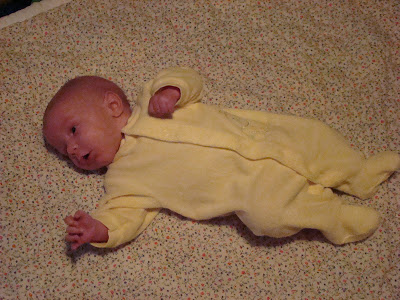 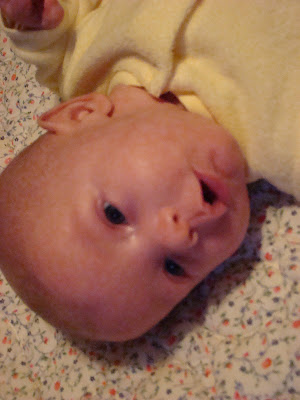 And why is this sideways??? Because it won't upload any other way!!!

Today started off in a fabulous way! Todd said I looked very tired so he got up with Nathanael when he woke in the morning and took all three kids to the office. He woke me up at 1:00 PM (yes PM). Ahhhh, what a feeling! There is nothing like sleep in a quiet house to start your day off right.

I got up, grabbed a diet coke (ok, yuck, I know, but I don't like coffee) and was ready to take on the day. It's been so hot, we have been stuck indoors for days now. I don't mind the heat but little man sure does. Just a few mins and he's puffing away. We have been doing a lot of crafts to pass the time. Today we made crowns. Lily, my princess, made a princess crown. Very fitting! 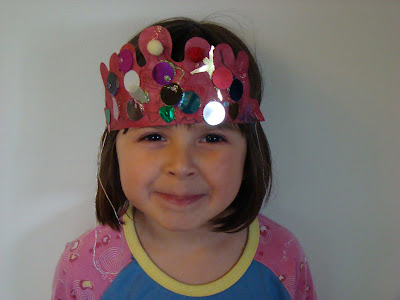 It has so much glitter glue on it I couldn't believe it stayed on her head. Now Alex, on the other hand, just wanted to squirt glue everywhere so, I gave him a piece of paper and said "squirt away"! I've never been fussy about kid crafty messes. As long as it will wash off I am all for it! We finished up with some pipe cleaner firecrackers that I recently saw in a magazine. Parents, I think?

We snacked, watched a movie, made cheesecake (yummy) and waited for Todd to get home. After dinner, Lily, Alex and I headed out to play in the blowup frog pool. If I didn't think the neighbours would stare I would've gotten into it, lol.

After the big kids were settled for the night I headed out to Walmart to grab a few things. When I came home to make a drop off (car full), before groceries, I found two unhappy boys. Todd and Nathanael. I guess it's that time again.... Fussing occurs about every 48 hours, pre-poop! So, I took him with me to the grocery store, hoping the car ride would knock him out. No such luck. He wanted to eat, didn't want to eat, wanted to be held, but couldn't stop moving. Poor pumpkin. So, I spent the majority of the trip holding and soothing him. Some wonderful woman saw me trying to unload my cart onto the conveyor belt with baby in arms and just started grabbing things and putting them up there for me. God bless her!
Nathanael is now asleep, I think :). Todd finished feeding him and took him upstairs. I put away the groceries, emptied and reloaded the dishwasher and am now waiting for the laundry to stop spinning so I can go to bed.