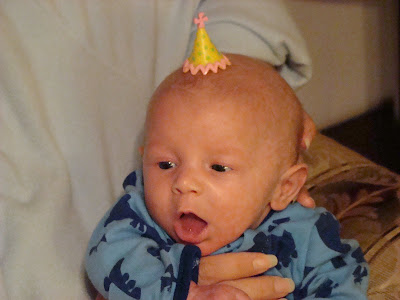 Today I turn 37. Thankfully it is not a significant birthday. I don't think I could handle 40 this year. I can't believe that in 3 years I will be 40. I remember when I was a teenager that I thought 40 was SO old!!! I think I already fall into the "old" category to some people. Last night, one of the neighborhood teenagers was having a party (parents nowhere to be see). Todd sighed and stated that he is officially a crotchedy old man as he wanted to call the cops and tell them that there was underage drinking going on down the road, lol.
I don't feel any older than I did a year ago, regardless of the fact that my body just produced another baby. I hope to feel young and energetic for many years to come. I think having young children helps me feel young. I mean, how old can you feel playing with dolls and cars everyday :).
On another note.....Nathanael had a checkup at the cardiologist a couple of days ago. The doc listened to his chest for a loooooong time. He said, he would assume that the top hole (the PFO), has closed and that the lower hole (the VSD) was very slight. Then the conversation went something like this... Me: how long does he have to stay on the medication. Dr: every time I take them off the digoxin before 6 months I regret it. Me: ok, so he'll stay on it then.
It is just me or was that an odd thing for a dr to say??? So, at least 4 more months of the dig, then reassess. They will do an echo at the next appt (October). He gained a few more ounces weighing in at 7.14 :). He is starting to fill out. His face is getting a little chubby. LOVE IT!
After much (not needed) food and cake...I am content and sleepy. One of my favorite gifts was a picture from a friend. She is pregnant, about as pregnant as you can get, and she drew on her belly "Happy Birthday Kelly" She emailed me a picture of her and her daughter with the message displayed for the world to see!!!! How great is that???