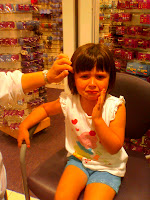 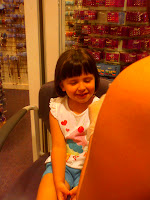 We were all at the mall, grabbing a bite to eat and shopping for a suit for Todd. Somehow, we ventured into a jewelry store and a conversation about earrings commenced. The next thing I know, Lily is saying she wants to get her ears pierced. We have had the conversation before but she has always had little interest in the pain associated with it. We watched an episode of Jon and Kate, where Maddie gets her ears pierced and that pretty much cured Lily of any thoughts of getting hers done. But....the time was now, as she proudly announced that she wanted to get her ears pierced. We headed to Claire's. We let Lily pick the earrings out on her own. Sh 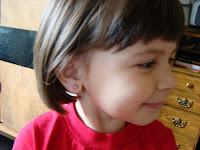 e chose a very cute pair, pink and white stones in the shape of a daisy.
Then the prep started. I warned her that it would hurt, not for long, but to expect some pain. I still remember the pain and it was not pleasant. I requested that they do both ears at the same time. Todd was not sold on the idea so he stood outside the store while they got Lily ready. Lily has such a great smile on her face, excited in anticipation. Then "click", they pierced her ears. As you can see from the picture, she suddenly looked shocked, fearful, betrayed, all at once. She started to tear up and her lip quivered. We consoled her and focused on her new earrings and in no time she forgot the trauma, lol.
I thought it went pretty well. No tears, Todd didn't lose it, lol. Can't ask for much more than that :).
Late, late....good night!

Kelly
Posted by Scott Family at 1:28 AM