Not Quite As Planned 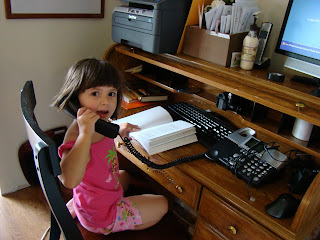 My plan was to get up early, get some errands ran and clean up the house. I got up late (although rested), and realized that I hadn't heard back from the pharmacy about Nathanael's heart med refill. I called from pharmacy to cardiologist several times before it got sorted out. Once the meds were sorted out we attempted to run some errands. The kids were restless before we left. That's never a good sign, lol. We grabbed a bite to eat, made a couple potty trips and headed to shop for Todd's b-day present. We struggled our way through the first store. Next, we headed to get b-day cards. Things went from bad to worse as Lily pulled card after card off the shelf and Nathanael started to cry. So, I abandoned the idea that I was going to get anything accomplished, threw everyone in the car and headed home.
The plan to hit Walmart and the grocery store on the way home crossed my mind but since Nathanael continued to cry and Alex fell asleep, I thought otherwise. I got three sleepy kids into the house where the chaos continued. Todd came home to three cranky kids, a burned out wife and no dinner. Thankfully he had a good day at his client site and took it all in stride.
I managed to get a few things done tonight. The house...well, let's say, I won't be having guests over anytime soon, LOL. All in all, the day was a little nutty but I wouldn't have it any other way.
Sidebar-I got a new converter for my memory card so I can now upload pics to my laptop :). I hope to post a daily pic. This one is of Lily, reading "Understanding Wallstreet", and talking on the phone, LOL. She is totally her father's daughter! Btw, the phone isn't even plugged in :). She's so darn cute!!