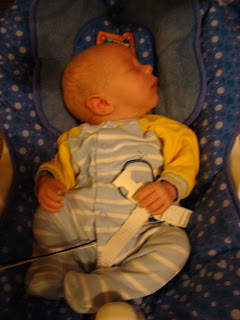 Nathanael had a checkup with his pediatrician today. I was thinking this appt was going to be a little redundant but Nathanael has a slight cough so I was able to get it checked out. He has grown another lb since his last appt, which was only 9 days ago, woohoo!!! He is now weighing in at 7.10. He grew just a smidge in length. The cough, which never occurred at the appt, as usual, didn't seem to alarm the doc.
He got 3 immunizations at the appt, one oral, two IM (needles). Poor bub. He actually did really well. He barely cried. Now, the heel stick for bloodwork was another story. He screamed! And then he slept and slept and slept. He slept right through his feeding, by about 2 hours. He roused, ate, then went back to sleep, for another 6 1/2 hours. He wakes momentarily to let out a loud whimper then goes back to sleep. I feel so bad for him. I have never heard these sounds come out of him before. I just gave him some tylenol for a low grade fever. I think it's going to be a long night for him.
What a rotten way to spend his birthday. He is 2 months old today. Since he has been sleeping most of the day the only pictures I could choose from of him sleeping in various places, lol. He is just so darn cute!